Homelessness and food accessibility have been a problem in many American communities for years, but they’re especially prevalent in Los Angeles. This year, LA's homelessness report stated that within city limits, over 41,000 people live in streets, cars, and shelters -- a 14% increase over last year. Even more unsettling is that Black people only make up around 8% of LA County's total population, but account for 34% of its homeless population. Poverty does not strike all demographics equally. Nearly all of the roots of systemic poverty such as lack of access to food, affordable housing, and quality education disproportionately affect communities of color.

For 50 years now, the Catholic Campaign for Human Development (CCHD) has worked to address the root causes of poverty in order to reduce inequality and empower communities that are disproportionately affected by poverty to lead healthy, dignified lives. A fair portion of our work has focused on addressing food inequality and homelessness in Los Angeles. Studies have concluded that:

"full inclusion of all residents in the economic, social, and political life of the [LA] region, regardless of race, ethnicity, age, gender, or neighborhood of residence—is essential for regional prosperity. Ensuring that people of all races and ethnicities can participate and reach their full potential has become more than just the right thing to do—it is an absolute economic imperative."

Our work to address social and economic disparities is vitally important in striving for a society where all can thrive. A myriad of other issues arise when such a large percentage of the population is homeless-- lack of healthcare, crowded or limited affordable housing, limited access to transportation, and a newer phenomenon commonly known as "food deserts".

What is a Food Desert?

Fact: Around 1 in 8 Americans are food insecure.

Food deserts are geographical areas in which residents lack access to affordable, healthy foods. For urban areas, a food desert means that the majority of the population lives over 1 mile away from an affordable grocery store; in rural areas, the distance is 10 miles. The U.S. Department of Agriculture estimates that 2.3 million Americans live more than 1 mile away from a grocery store and do not own a car.

Sometimes in urban areas, public transportation helps, but a grocery trip may take several bus or train rides -- and many who live in marginalized communities also lack access to public transportation. The term "food desert" also takes into account the affordability of local grocery stores. Oftentimes, grocery stores are present in a low-income community, but unemployment, low-wage jobs, and other factors create conditions that make those stores unaffordable to the surrounding community. “Building a new store does not mean people will shop there; the store has to offer the products, prices, and other characteristics that shoppers value,” according to the USDA.

Due to the lack of access to nutritious foods, people who live in food deserts often rely on fast food and convenience stores for sustenance, putting them at higher risk of diet-related health issues including diabetes, heart disease, obesity, hypertension, and more. These compounding health issues plus a lack of access to affordable healthcare in many of these communities adds even further economic strain on families and perpetuates the cycle of poverty we so diligently work to break.

The USDA  identifies the following community characteristics as those most likely to become a food desert: 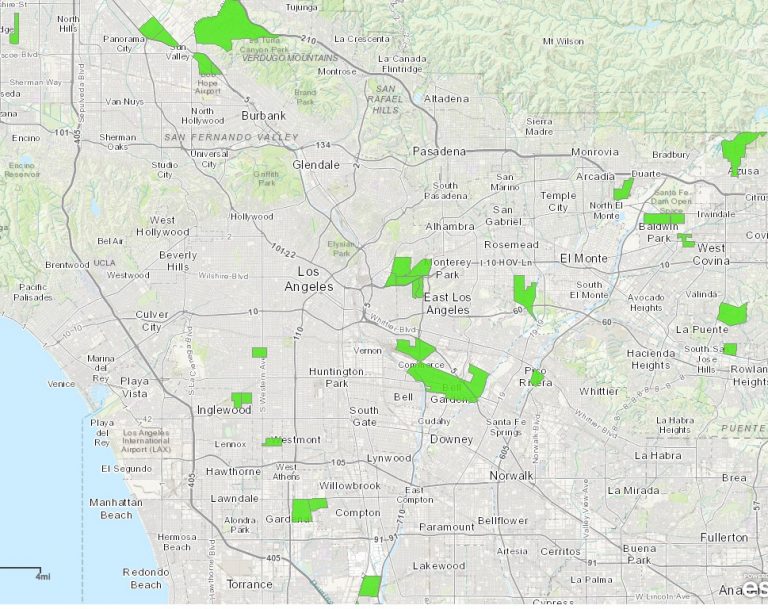 Los Angeles, a beacon of hope for some to follow their dreams, is also home to extreme poverty and homelessness. Its communities range from some of the wealthiest in the country to some of the poorest; in fact, many neighborhoods do not even have a single grocery store. This means that many people rely on convenience stores and fast food for the majority of meals, which causes and exacerbates many of the population's health issues.

In 2017, more than 1.4 million children aged 6-18 were homeless in the United States. Meanwhile, any household with children is twice as likely to experience food insecurity. As you can imagine, research shows there is a major overlap between the lack of access to healthy foods and homelessness in Los Angeles. According to the city’s most recent homelessness report:

The Link Between Homelessness and Food Instability

Research has been done that analyzed the health and eating habits of people experiencing homelessness in Minnesotan food deserts. After conducting surveys at homeless shelters and evaluating the price and availability of healthy foods in a variety of neighborhoods, the study showed that "80% of the sample was overweight or obese, with women consuming less than the recommended level for the fruits, vegetables, and milk food groups and excess for the fats/oils/sweets food group." While this study was conducted in Minnesota, the findings can be applied more widely; food deserts and food quality both outside of and within homeless shelters has been an issue in other areas of the country as well.

They also found that people experiencing homelessness in the area are more likely to live in a food desert because, despite the efforts of local food banks, "neighboring stores [have] limited food choice and food stamps did not adequately cover food costs. Results from the food store survey found the majority of food prices exceeded Midwest or national market-based prices (MBP)."

The organizations we support work to address the root causes of poverty and to end this vicious cycle in the U.S.

With the COVID-19 pandemic in full swing, the country has seen more than 20 million people lose their job, with an estimated 40 million who are losing their homes due to evictions and foreclosures. Coronavirus is having numerous consequences in both public health and economic stability for millions of families, which is further exacerbating both homeless and food inequality issues. More than ever, the work of CCHD-supported organizations is central to addressing these economic and social inequalities.

Organizations That Address the Causes of Poverty in LA

The Catholic Campaign for Human Development supports organizations throughout the United States that work toward economic justice, including those who empower local communities to address homelessness and food deserts in Los Angeles. Here are some examples of the great work that's been done over the years:

Take Action in Your Community

Help us amplify the work of CCHD-supported groups working to bring access to healthy food to every Los Angeles resident and reduce homelessness throughout the city by sharing this article on social media. Be sure to follow us on Twitter and Facebook for more information about how you can join the work to break the cycle of poverty in your city.

Are you looking for additional ways to take action in your community? Visit our Take Action or our Support webpage.

Poverty USA is an initiative of the Catholic Campaign for Human Development (CCHD) and was created as an educational resource to help individuals and communities to address poverty in America by confronting the root causes of economic injustice—and promoting policies that help to break the cycle of poverty.

The domestic anti-poverty program of the U.S. Catholic bishops, CCHD helps low-income people participate in decisions that affect their lives, families, and communities—and nurtures solidarity between people living in poverty and their neighbors.