In 2018, 38.1 million people lived in Poverty USA. That means the poverty rate for 2018 was 11.8%. Use our interactive map to take a closer look at poverty statistics in the United States.

Who lives in Poverty USA?

All those who make less than the Federal government’s official poverty threshold... which for a family of four is about $25,700. People working at minimum wage, even holding down multiple jobs. Seniors living on fixed incomes. Wage earners suddenly out of work. Millions of families everywhere from our cities to rural communities.

Poverty does not strike all demographics equally. For example, in 2018, 10.6% of men, and 12.9% of women lived in Poverty USA. Along the same lines, the poverty rate for married couples in 2018 was only 4.7% - but the poverty rate for single-parent families with no wife present was 12.7%, and for single-parent families with no husband present was 24.9%. 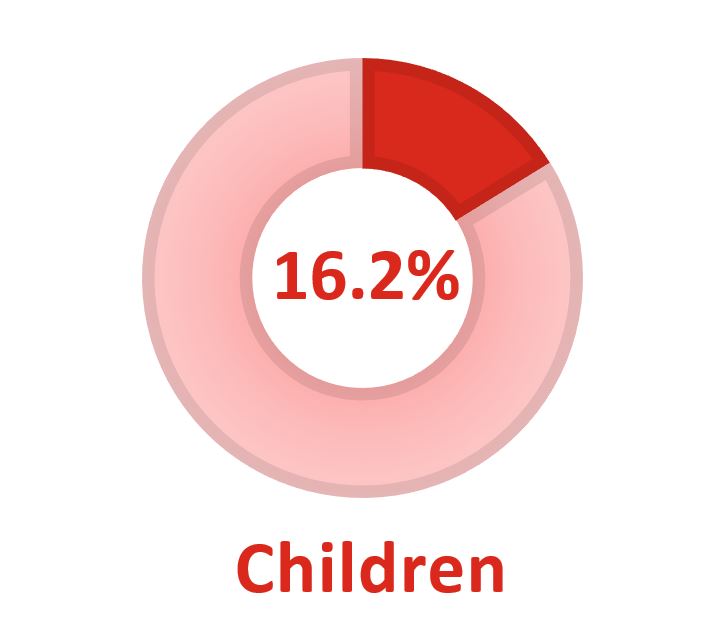 In 2015, the National Center on Family Homelessness analyzed state-level data and found that nationwide, 2.5 million children experience homelessness in a year.

Though the official census data gives seniors a 2018 poverty rate of only 9.7%, the Supplemental Poverty Measure, which accounts for expenses such as the rising costs of health care, raises the senior poverty rate to 14.1%.

The Economics of Poverty

Poverty thresholds are determined by the US government, and vary according to the size of a family, and the ages of its members. In 2018, the poverty threshold—also known as the poverty line—for an individual was $12,784. For two people, the weighted average threshold was $16,247.

For more details about poverty thresholds, visit the US Census Bureau. Poverty thresholds are intended for use as a statistical yardstick, not a complete description of what people and/or families actually need to live.

What’s worse, 5.3% of the population—or 17.3 million people—live in deep poverty, with incomes below 50% of their poverty thresholds.

And 29.9% of the population—or 93.6 million—live close to poverty, with incomes less than two times that of their poverty thresholds. To learn more about poverty thresholds and what it is like to live at the poverty line, take a look at the statistics.

Source: US Census Bureau; Income and Poverty in the United States: 2019

The USDA estimated that 11.1% of US households were food insecure in 2018.  This means that approximately 14.3 million households had difficulty providing enough food for all their members due to a lack of resources. Rates of food insecurity were substantially higher than the national average for households with incomes near or below the Federal poverty line.

There are programs that help.

56% of food-insecure households in the USDA survey reported that in the previous month, they had participated in one or more of the three largest Federal food and nutrition assistance programs. One of these programs is known as SNAP, or the Supplemental Nutrition Program. Learn more about policies that help.

Source: United States Department of Agriculture, Food Security Status of US Households in 2018

In addition, every day, thousands of people—working with their neighbors and community—are finding ways out of Poverty USA by strengthening families, creating jobs, and improving neighborhoods. For nearly five decades, CCHD has supported nearly 12,000 community-based projects led by low-income people through our grant program. Read some of their stories.